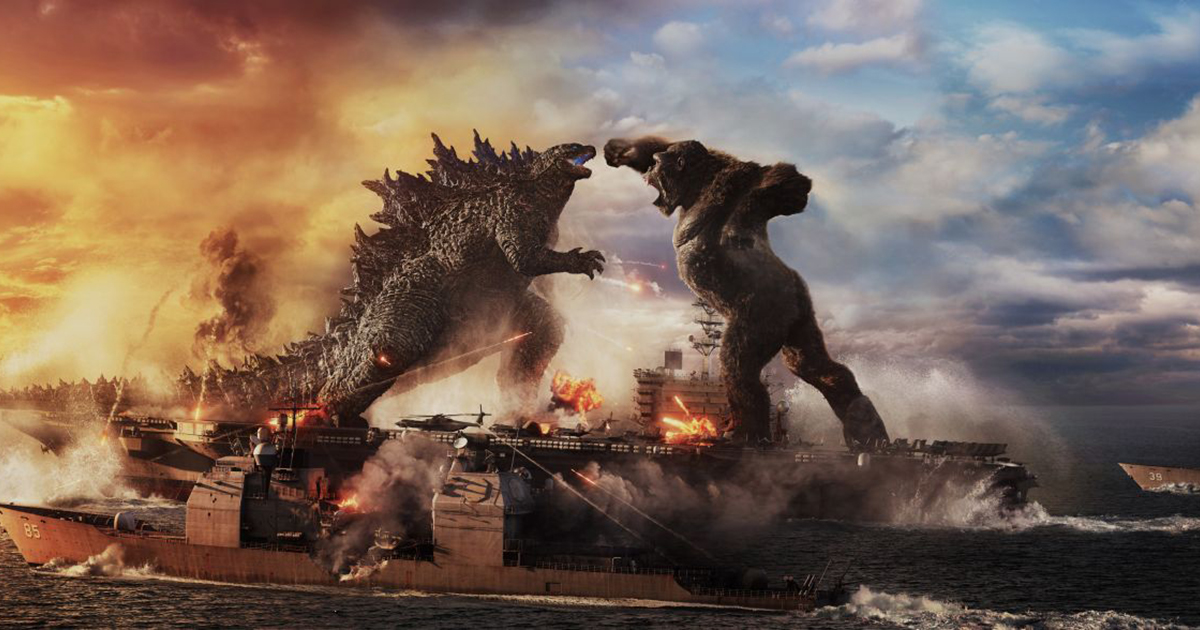 Hollywood has a history of pitting its cinematic giants off against each other.  We’ve had Batman v Superman, Jason vs. Freddy and Rocky vs Mr. T (and vs Ivan Drago and vs Apollo Creed and…). This time, in the case of Godzilla vs Kong, Hollywood delivered literal giants – 30-story tall giants at that. The showdown is the latest and perhaps final entry in the MonsterVerse series that resurrected some of the most recognizable names from the long-running, somewhat-connected franchises. As expected, it delivers some of the biggest action you’ve ever seen on the screen in months, and also a pea-sized brain worth of smarts.

In a stroke of incredible irony, all it took to take down these behemoths was something as minuscule as the virus. After the movie theaters and all of mankind was hit hard by a monster virus that felt like it would never go away, Warner Brothers stunned the world with an announcement. The studio decided to take the film, which almost demands to be seen on the big screen, to a new playground – the small screen. After a deal with HBO Max, the film premiered simultaneously in living rooms and a few select theaters.

As you may expect, no matter how big your television is, it’s probably not ideal to watch two skyscraper sized titans face off in your living room. It is a battle of a scale in both physical size and reputation that we have not seen since… well since the 1960s Kong versus Godzilla film. Even with the new size constraints, Adam Wingard‘s film kind of works. So that it still drew blockbuster-craving fans to the theaters. pulling in a post-pandemic record $420 million worldwide and counting.

There is some good news for MonsterVerse fans who decide to watch at home. While ideally made for big cineplex screen with a killer sound system, Godzilla vs Kong has enough going for it that I quickly got lost in it all. It’s dumb, it’s loud and it is also just the kind of brainless romp we could all use right now. A temporary reprieve for your brain that shifts it straight into summer blockbuster mode – something that has been completely lost this last year. 50% brain power, 50% artificial butter-flavored popcorn topping residuals. 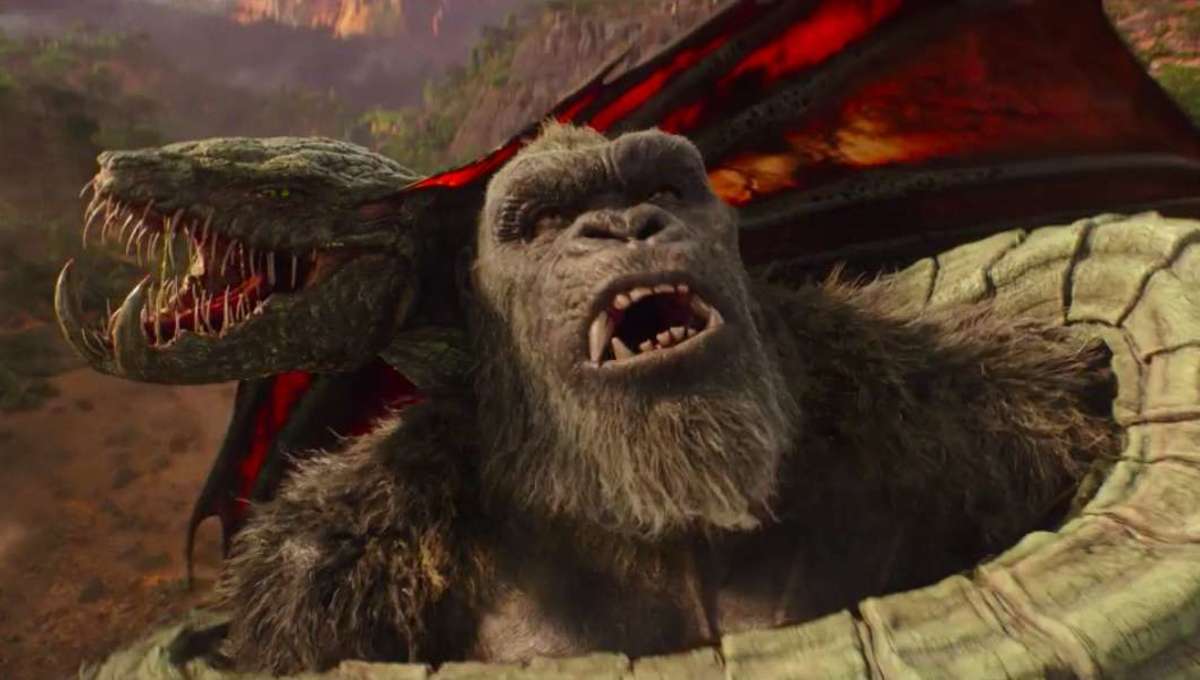 Godzilla vs Kong brings back some familiar faces and new ones. It sports a star-studded lineup that any filmmaker would envy – Millie Bobby Brown, Kyle Chandler, and adds Brian Tyree Henry, Julian Dennison, Demián Bichir, Alexander Skarsgård, Rebecca Hall and more. Unfortunately, Wingard criminally misuses them. Or, does he? I guess that depends on what viewers are here to see. If you were drawn to the names on the marquee in hopes of seeing humans do anything close to intelligent, valuable, or thought-provoking, prepare to be disappointed. But, if you are here to see (no spoiler here) a battle between two titans of the screen in the form of an enormous ape versus the nuclear lizard – then you get your money’s worth.

This is Kong’s film from start to finish. Like renditions of him dating back to the early days of film, it’s hard to not empathize with a big homesick gorilla who falls in love and just wants to be left alone. He has more personality in one station wagon-sized pinky that Godzilla has in his entire body. Kong is given the the royal treatment, rarely scary, instead he is transformed into big lovable man child, complete with yawing and butt scratching. He even showers in waterfalls to catchy oldies tunes.

On the other hand, Godzilla is temperamental, often-underwater, super-charged. Even when above ground he is all slamming and screaming – no oldies here. There’s not much to cuddle up. He does sport a very cool radiation powered weaponry that can be seen creeping up his back like a charging battery meter. When it peaks he unleashes a fiery blast of blue energy used to take down his opponents.  It is not as if Godzilla is unlikeable, he’s just the Abbott to Kong’s Costello. (If you do not know what I am referring to ask your grandparents).

Between scenes with humans talking about something are several epic fights across a variety of terrains. It is exactly what you came for. Who the heck doesn’t want to see Kong surfing atop an aircraft carrier grabbing a fighter jet out of midair and hurdling it at his new rival. No matter the location we are taken to, our favorite furry and reptilian monsters do their best to turn them into rubble. You would think it would get tiresome, but that’s the magic here. If anything, I found myself more and more committed as the fights went on. So much so that is often felt like a WWE match video game. As I watched I almost wanted to grab a game controller to jump in the action.  Like a WWE match it comes complete with the equivalent of a wrestling steel chair used to even the odds for what looks like a mismatch. Sure the Deus ex Machina is near groan-worthy, but it is also so much fun. Another serving of camp, please. 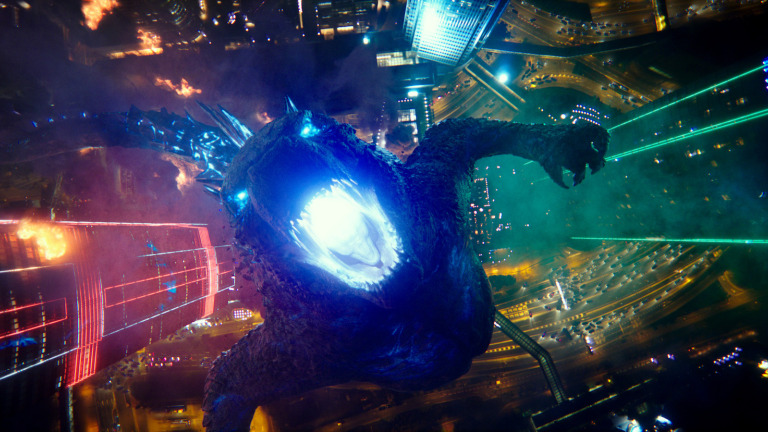 The film has a strong sense of showmanship. The effects are a wonder to watch and the fight choreography is a blast. Even after several back to back bouts, I wanted more.  And thanks to some crafty cinematography by Ben Seresin, this entry one looks better than most of the series did, in fact it is beautiful at times. Even the darker scenes ,which were a huge issue in Godzilla: King of the Monsters, are easy to consume. A gorgeously neon lit Hong Kong is a very nice touch –  the best shot scene of the franchise and one that will be remembered and copied for years to come.

For those who actually care about those pesky humans, on a scale of dumb to dumbest even them impeccable Rebecca Ferguson, (the brightest and best written of the the characters) does not come off all that well. Still, she is joy to watch while delivering ridiculous technological science mumble jumble with confidence. She needs to be in everything. Chandler is again draws the short stick and is wasted. BTH is the most entertaining to watch here as a conspiracy theorist. He along with Jennison and Mille Bobbie are sent on a senseless scavenger hunt that delivers a few good laughs but little else. Eiza González and Bichir are essentially your baddies – both are okay, but would have served the film better if they went a little more over the top.  But, trust me, the humans have little to do here besides throw out the exposition that you probably will not completely forget once the big monsters start duking it out.

There are some welcome surprises throughout, including some sweet moments between a deaf girl (Kaylee Hottle) who can communicate with Kong. None really make much sense, but you don’t see me complaining.  Compared to the other films in the series, this one ranks just below Kong: Skull Island for me. That film found the right balance while keeping the human character more than just the chewing gum Kong and Zilla have to peel off the bottom of their feet. Yep G v K is pretty dumb. But you have to remember, so was just about every other Godzilla films since the originals. The quality level of the effects, but as a whole the films have not matured at the same rate. And, I am not sure that matters, because as soon as this one ended I wanted to watch it again.

Am I being a little factitious here when it comes to my criticism? Sure. I have harped on films for much less. And yes, a screenlay with better developed human characters could have elevated the film to something more substantive. (Although they kind of tried with 2014’s Godzilla only to deliver mixed results). Guess what? No matter what you wish would be on screen is not happening. So turn off that part of your brain, sit down and enjoy the ride – we all deserve it.

If you are coming for engaging dialogue, well-developed characters or logic rooted in science, go elsewhere. If you want to have a rock ’em sock ’em escape, then grab a seat.