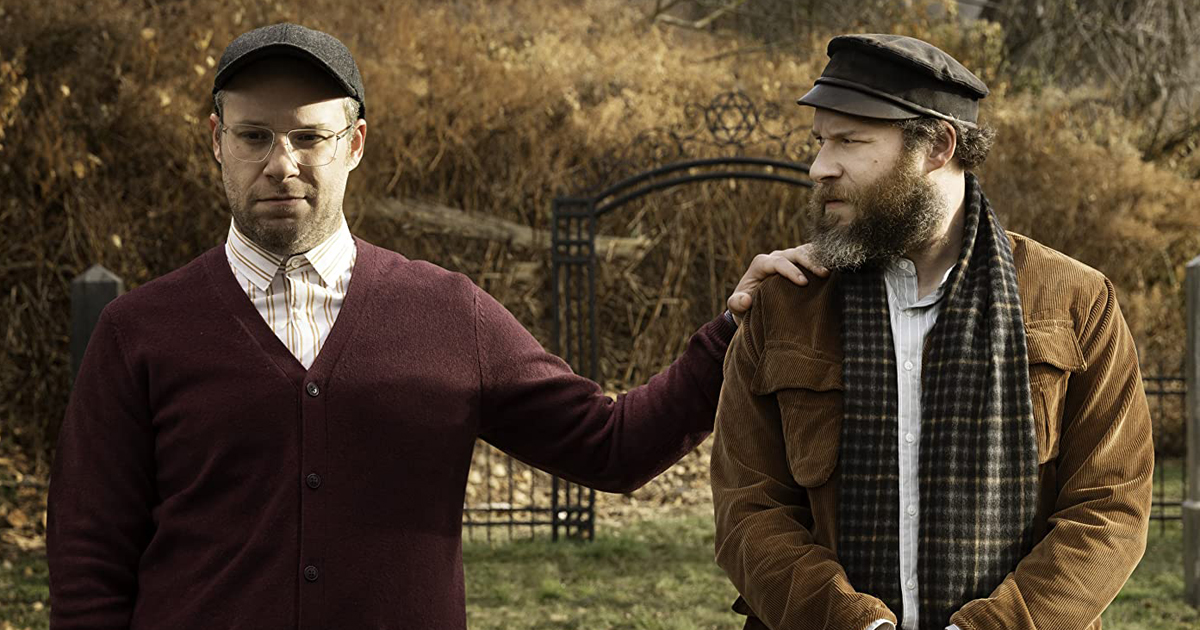 It’s the classic American immigrant story. Travel to America, fall into a vat of pickles, emerge 100 years later and try to make it in the modern world. What family doesn’t have a similar story, right? Okay, maybe it is not your typical family story, but it is a tasty one.

The odd and whimsical “An American Pickle,” playing exclusively on HBOMAX, is a comic fable about heritage that comes in the oddest of places, a pickle factory. That’s where back 1919, hard-working Jewish immigrant Herschel Greenbaum (Seth Rogen) had an on the job incident and is preserved in a vat of pickles for a century. When he remerges, not only is he completely healthy, he also has not aged a day, either physically or mentally. With his entire family having passed away during his pickle of a situation, Herschel is thrust upon his only living relative, Ben (also played by Seth Rogen) a computer programmer living in modern Williamsburg.

Uncannily, the Greenbaums are nearly identical twins. I guess that happens when you are played by the same actor. Both are 38 years old (minus a hundred pickled years or so) and are only physically distinguishable by their personal style. Ben is clean-cut, buttoned-up (literally to the top), and wears glasses. Herschel sports a thick, shaggy beard, rumpled worker’s cap and speaks with a thick Eastern European accent.

Where the differences are most glaring is their outlook on life, mainly their incompatible perspectives on religion, family, and work ethic. Herschel is a go-getter who takes great pride in his Judaism. He rolls up his sleeves, digs ditches, stomps on rats, and even makes pickles out of literal garbage to help defend the honor of his family name. In contrast, Ben seems to have abandoned his faith, forgotten his family, and cannot even pull the trigger on which color to use for the logo for his long-in-development app.

Written by Simon Rich, whose New Yorker novella served as the basis of the story, the film quickly and humorously blows right past any science behind the phenomenon, preventing any preoccupation in the hows or whys of the situation. With few supporting characters of note, the focus remains almost exclusively on the Ben and Herschel relationship, beginning with the classic fish out of water premise, getting a crash course on modern life. Although commonplace, watching a 20th-century immigrant tackling the oddities of hipster Brooklyn is quite entertaining. Borrowing from several films including “Borat,” Woody Allen’s “Sleeper,” and the Peter Sellers classic “Being There,” it feels familiar but never like a knock off.

It is delightful to watch Herschel’s astonishment with what we would consider the small things. The idea of owning 25 pairs of socks and having easy access to seltzer, a drink Herschel has aspired his whole life to try, is not remarkable to most but is mind-blowing from his old world perspective. While mainly played for laughs, these moments provide an insightful look into the shifting values of the world.

First-time director, Brandon Trost, avoids leaning too heavily on the easy fish out of water premise. He keeps things moving briskly, never staying in one place too long moving quickly into unexpected places. Along the way, these tangents giving us a satirical look at everything from consumerism, cancel culture, hipster, internet fame, and the American Dream. That is a lot to fit into its slight 88-minute runtime.

This may explain why Trost never digs too deep, only skimming the surface on most, taking us on jaunts that hop around somewhat aimlessly. As an interesting or comfortable groove is found the needle quickly jumps again, creating a somewhat disjointed mashup of tones. And while it touches upon these numerous ideas, the film noticeably sidesteps tackling the heavier ones such as the Holocaust, politics, or anything but a surface-level examination of antisemitism in today’s world.

At the risk of ultimately being rendered rudderless by the shifts in tone, emotional beats are dispersed throughout, keeping the central theme of family effectively represented across the extent of the film. The idea of honoring where we came from remains the film’s pulse, keeping its heart in the right place. Without being overly sentimental the story explores it through the changing perspectives on cultural and spiritual identity. Even with the silly premise it still makes you think. Would your ancestors be proud of you? Do you still honor the family? Should you?

Besides Sarah Snook (Succession) who makes the most of her brief screen time as Herschel’s wife, this is ultimately a one-man show. For any of this to work, we need to believe these are two different characters, not just one actor playing dress-up. Luckily, it does not take long before you forget there are two actors at all. This is due in part to the careful attention to shot-blocking and cinematography help bolster the illusion (which probably partially explains why Trost, a cinematographer, was handed the directing reins).

The real credit here goes to the outstanding dual performance by Rogen that allows the film to ascend above a gimmick and enables the emotional weight of this fable to really land. His work at Ben, which is somewhat against type, is serviceable. But it is his take on Herschel is where the magic of his performance lies. Rogen shows off his acting chops as he transforms, delivering an endearing character with some old-world appeal. That appeal is found in his welcoming accent and choppy English, appropriately dated facial expressions and all the way down to his mannerisms. He delivers an irresistible character who retains a sweet innocence even when brined in backward beliefs.

“An American Pickle” is a surprisingly touching and funny with a memorable career-topping performance by Rogen. Even though it often feels like the recipe has a few too many ingredients, this pickle has just enough flavor.

With a recipe that uses a double portion of Seth Rogen and a pinch of heart, this pickle has just enough flavor.

2 thoughts on “Film Review: ‘An American Pickle’ Delivers a Double Serving of Laughs and Heart”