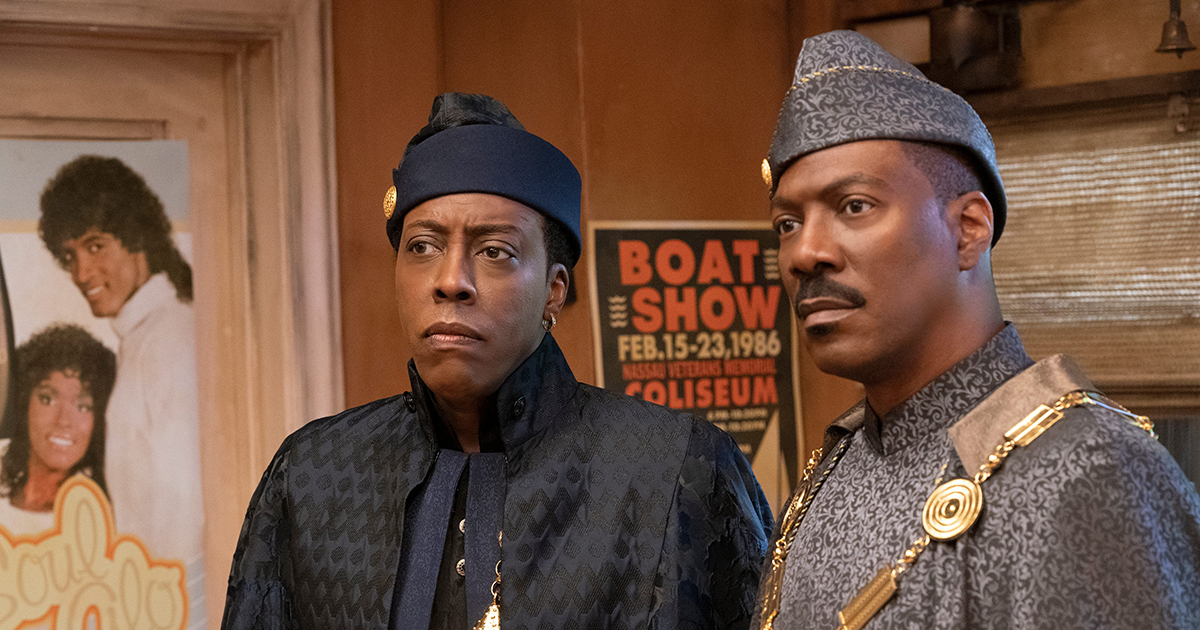 Waiting in anticipation of a new movie you want to see can be such sweet sorrow. First, there’s that article that they’re going to be making this sequel, reboot, whatever, and YES! FINALLY! There are reports of casting, glimpses of the set even. It’s real! Meanwhile, you reminisce about the previous movie, see pics and clips here and there, whetting your appetite. “It’s gonna be so good!” you say to yourself. And then, after all that time, it’s here! A day early, even. Thanks, Amazon! Here we go!

I watched Coming 2 America with the same eager anticipation I had with Bill & Ted Face The Music. I love the crap out of Coming To America for so many reasons, and would confidently say it’s one of my top 5 favorite comedies ever. I cheered when they jumped on the 30 years later craze we see with Cobra Kai, Wet Hot American Summer, and soon-to-be… Frasier?! It’s true. Anyhow, Eddie Murphy was getting the gang back together! Almost all of the original cast returned, along with several talented new faces. Everyone in this movie is talented, many are multi-talented and we have all seen them shine in other things.

Craig Brewer is an awesome director, with great films including Dolemite is my Name, Hustle & Flow, and Black Snake Moan under his belt to name a few. DP Jody Williams has a long career shooting on some of the biggest films of the last 25 years. They had the original writers on board. There are lots of reasons to be excited about this movie. So what happened?

You might have seen some murmurings and early mixed reviews already, but suffice it to say, Coming 2 America is not on par with Coming TO America by a long shot. The plot follows Akeem and Semmi back to New York to find his recently revealed son, so he can fulfill the wishes of his father, and give the Kingdom of Zamunda a male heir. When he finds the young man, convincing him to come along is one thing, but turning him into a king is another challenge altogether.

So, is it funny? There are plenty of good jokes, and funny scenes, the old characters all hold up and are once again enjoyable to watch, but this does not make a good comedy. There are some deep flaws with the story this film is telling us and a choppy narrative that robs everyone of their original sparkle. Scenes stand up on their own across the film, but they are mostly rehashed bits from the original, like the Barber Shop guys. The best original joke I saw was King Jaffe’s death.

This death scene is pretty early in the film and was part of one of at least 4 big musical numbers throughout. These were callbacks to the smaller number of performances in the original, which were novel, and funny in their opulence and then later lack of shine. The numbers in Coming 2 America felt like these sort of magic wand events that were conjured out of nowhere, with no discernible reason or importance. They were good to look at and had lots of awesome costumes, courtesy of Oscar-winning Black Panther (and Yellowstone) costumer Ruth E. Carter, but all of that shine is covering an empty glass ornament.

A big part of what made the original great was its rawness (Yes, that’s an Eddie Murphy pun). The R rating made a huge difference in how the jokes hit as well, and they showed contrast well in the two ends of Akeem’s reality, from palace life every day to mopping the McDowell’s restaurant. This time it felt plastic, not majestic, with a forced choreography to it all, and some questionable CGI. Before there was apt social commentary with the McDowells being an affluent black family, surrounded by the crime-ridden streets of Queens, circa 1987, and finding out about the pauper prince under their noses changes their whole approach to how they treat Akeem. The world they built back then was believable in its silliness, and its realness.

Sadly, the realness of the first film makes way for what feels like a poorly planned 30-year high school reunion. Everyone is dressed up nice, there’s some fresh music, and they are all clowning around, having lots and lots of fun, and boy are they just like they were back in the day! What an old cut up, that Randy Watson is! Then there are the dramatic or heartfelt scenes, which feel like boat anchors for the pace, and come off making Akeem look like a backward old man, stuck in his ways, which sucks because he was who we’re supposed to be rooting for! But just like the Reunion, there is a fakeness to all of it, everyone is putting on a front.

There is a lack of spirit, of heart in this film that made the original so, so great. Also, the B plot was King Ralph, so there’s that. I would say if you love the original Coming To America like most living people do, hold on to those memories, and don’t expect a whole lot out of Coming 2 America. Watch it, though. It’s entertaining, and there are some good jokes and some nostalgia bombs that are worthwhile but don’t expect a shiny diamond, because this time around they missed the mark.

Coming 2 America is entertaining, has its share of good jokes and nostalgia bombs, but don’t expect a shiny diamond, because this time around they missed the mark.