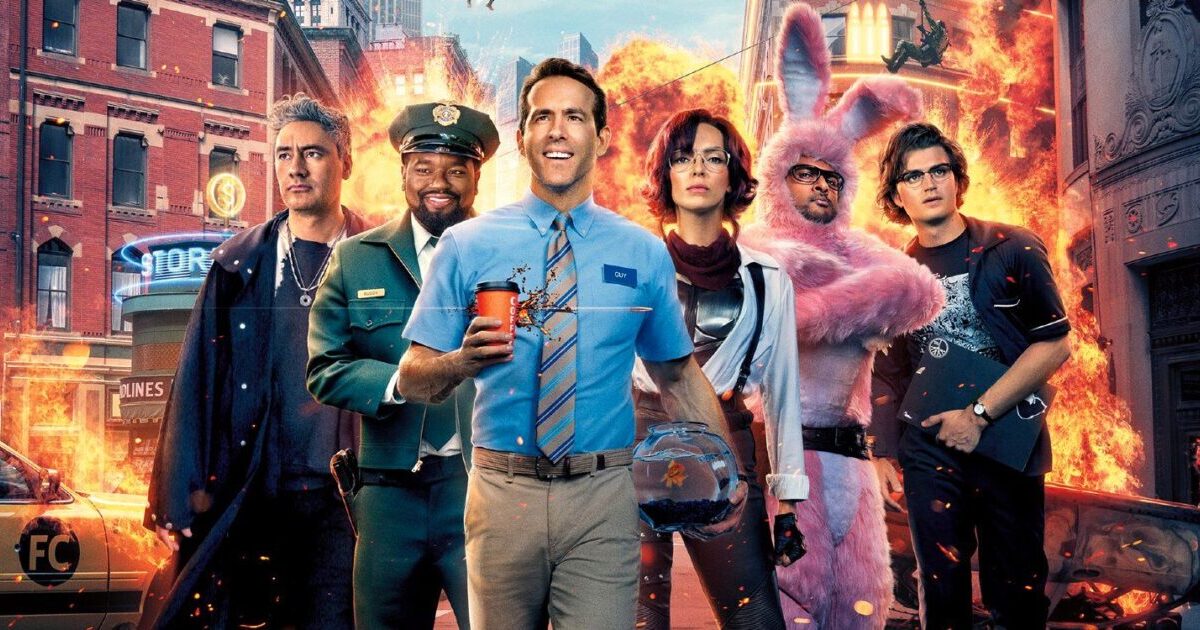 Video Games movies have a spotty history at best. 1993’s Super Mario Bros., Streetfighter (the only film to this day that I ever walked out on), all the Tomb Raider movies, and even the recent Sonic the Hedgehog film all would have been better off remaining as video games in my opinion. Luckily for us Shawn Levy’s latest film Free Guy, while set around a video game world, is not a video game movie. What we get instead is a rom-com action film that is endlessly creative, funny, sweet, thrilling and so packed with detail you’ll want to play again and again.

Free Guy is actually a movie about a guy – a guy named Guy (Ryan Reynolds). He lives in Free City, a wild and exciting place where action is always just a step away. Let’s just say Guy has a routine. He starts each day by saying good morning to his goldfish, Goldie. He watches the same news while eating the same cereal. He even puts on the same outfit everyday consisting of a very nondescript blue button down shirt and khakis. Then, on the way to work he picks up a hot coffee, two creams, two sugars – every day.

Then it is off to his bank teller job, where, of course, several times a day he gets robbed. Yep, you read that right. Oh, I should have mentioned that Guy lives in a video game – an MMORPG to be exact. He is your typical NPC (non playable character), which means he is essentially a background character who is not supposed to have free will or even much of a personality besides what he is programmed to do and say. His main line is “don’t have a good day, have a great day.” He is just one of hundreds of NPCs that roam the streets of Free City while characters controlled by real humans run amok doing whatever they please. This usually consists of robbing, killing, or blowing stuff up – all of which earn them points in the game to level up.

Guy, like NPCs, lived happily within his routine – never really questioning it. That is until one day when everything changes after seeing the woman of his dreams walking through the video game streets of Free City. Her name (which he learns later) is Molotov Girl – she’s a playable character controlled by Millie (Jody Comer) a game programmer who is on a mission of her own in Free City. She is not there to play and level up, but rather to find proof that the pompous Free City programmer Antwan (Taika Waititi), built the game world off technology stolen from her and her partner’s Keys (Joe Keery) concept.

Once Guy crosses paths with Millie everything changes for him. Whoever she is, Guy falls hard for her and will do anything to get her attention. Suddenly he is demonstrating, although he doesn’t know it, free will – something he never had before. It leads to him making some less than expected and entertaining choices that lead to him literally seeing his world in a whole new way – thanks to a pair of sunglasses. Not only does he see the world differently he can interact with it in ways he never could before. His new ‘powers’ set off a string of entertaining events that make for one of the most enjoyable rides of the year.

I will admit, that is a lot of setup, but the film has a high concept that may need some explaining for non-gamers. And that is who I want to target with this review, the non-gamers. Do not be turned off by premise. Sure it is set in a video game world, but there’s much more to this existential action comedy to make it worth watching for a pretty wide audience. It’s clever, funny and packed with ingenuity. With qualities of Groundhog Day, The Truman Show, Wreck-It Ralph, and a hint of Elf this film aims to, and succeeds at, delivering a crowd pleaser. We pop back and forth between Guy’s VR video game world and the real world life of Millie and Keys in two connected but separate storylines. Surprisingly neither weighs the other down. Levy finds a balance, making both equally satisfying to watch while avoiding ever becoming too confusing. 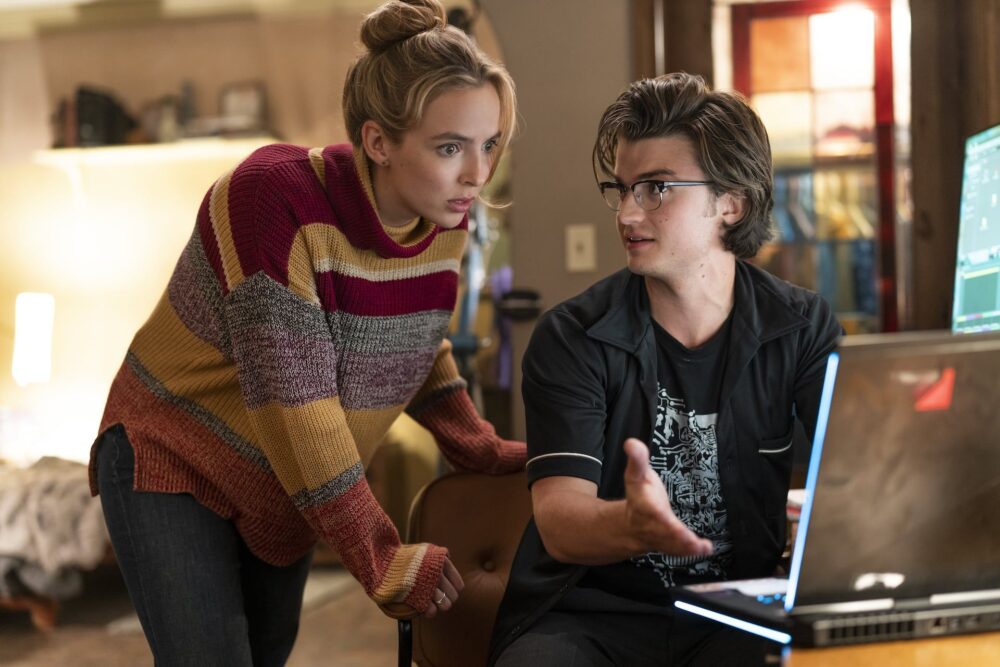 Matt Lieberman and Zak Penn’s script always keeps things moving. There’s not a second to be bored from the action scenes to the constant humor and including a little romance which I found delightful – predictable, but delightful. The main reason Levy is able to pull it off without falling into the traps so many have before can be summed up in two words, Ryan Reynolds. This is probably the most Ryan Reynold-ish roll of his career, even more so than Deadpool. He has charm, more charm and charm to spare which he puts it on full display. But this time there’s a touch of childlike wonder watching Guy trying to make sense of his new perspective on this crazy video game world. It leads to a lot of vicarious fun as Guy serves as the audience’s avatar, acting out in curious ways that pull you right into the film. It is a blast to watch and I can’t imagine anyone else in the role.

The more Guy (or Blue Shirt Guy as he becomes known) acts out in less than expected ways, the more he levels up, causing a ripple effect in the game. Eventually, he catches the attention of the gaming community, the media, and the greedy and eccentric owner of Free City. I’ll spare the details, but a bigger, world crossing adventure ensues that you can experience for yourself. It may seem like I gave away too much here, but there’s so much more to cover. The film almost effortlessly packs in a lot of entertainment and takes us on so many adventures that you’ll have a ton more to explore for yourself in this sandbox.

The world-building is absolutely incredible, once in Free City, it feels like a new world. You really are transported into a game world. It is big, loud, colorful and full of endless visual treats to take in. So much so that his film will certainly keep viewers busy as they watch for the easter eggs and ambient humor missed while focused on the story. Gamers will definitely get more out of the incredible detail incorporated here, but even newbs will get a kick out of it all. Too many directors when given access to CGI show little or no restraint. Levy goes nuts here, but it is rarely distracting and almost always takes a backseat to the story, which is nice to see. 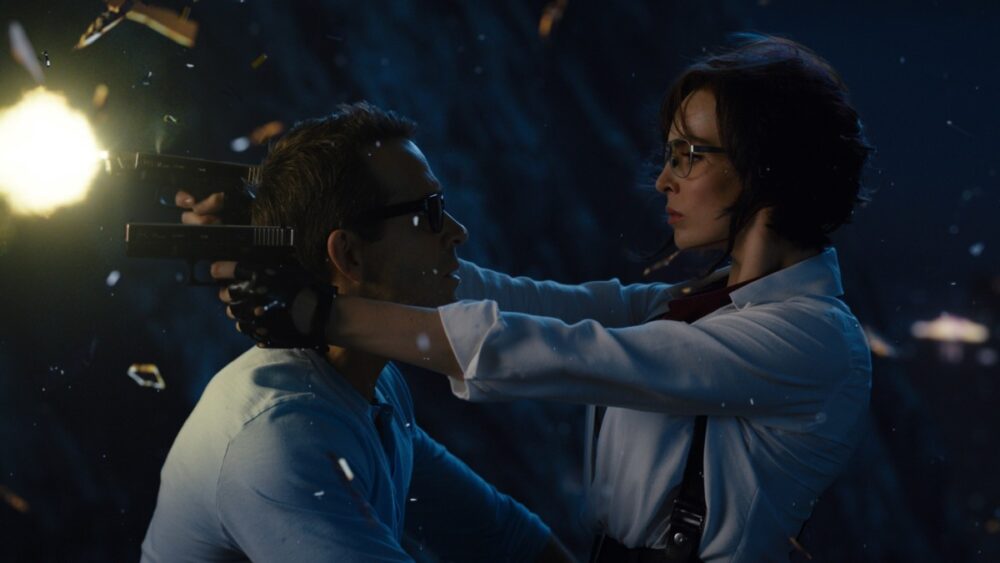 In addition to Reynolds the cast does some impressive work here. Comer is more than a worthy match for Reynolds. She brings a lot to the table making Millie endearing, funny and she kicks some ass along the way. (If you have not seen her at work in Killing Eve, add the sexy, killer series to your watch list.) Her chemistry with Reynolds makes each scene, especially the ones that could have felt out of place, land some direct hits. As Guy’s security guard best friend, Lil Rey Howrey delivers some of the film’s funniest lines and is not the one-dimensional sidekick you may expect. Keery brings with him and every-guy feel that works well as the straight guy. Waititi, while funny at times, is a little hammy and one-note for my taste. There is also a slew of cameos from Youtube gamer influencers that had my 13-year old daughter smiling to some bigger names and IP that will certainly delight audiences.

When it comes down to it, Levy delivers surprisingly more depth than expected. The themes at play are familiar but handled with a fresh enough approach to keep viewers engaged. Though it doesn’t always pull off everything it aims to. The results diminish slightly after the world exploration subsides and shifts more toward trope territory. Plus, there were a couple of jokes that did not quite click for me. Honestly, that may be nitpicking. I didn’t mind these small stumbles since there is so much more to please. I was having a blast with the colorful environment, self-aware humor and wild action from beginning to end. And, while surrounded with wall to wall effects, the biggest accomplishment is delivering characters we really care about. It could have been just another special effects reel with a spatter of jokes – it is not that in the least. It is the story first approach that gives the film a classic 80s/90s vibe which should lead to a lot of replay value. I expect to revisit Free City again soon and plenty of times after.

If you are expecting the film to change your life, probably go elsewhere. If you are looking for a great time, grab your pocket full of quarters and jump into the fun.

‘Free Guy’ is an inventive rom-com action film that is endlessly creative, funny, sweet and so packed with amusing detail you’ll want to play again and again.