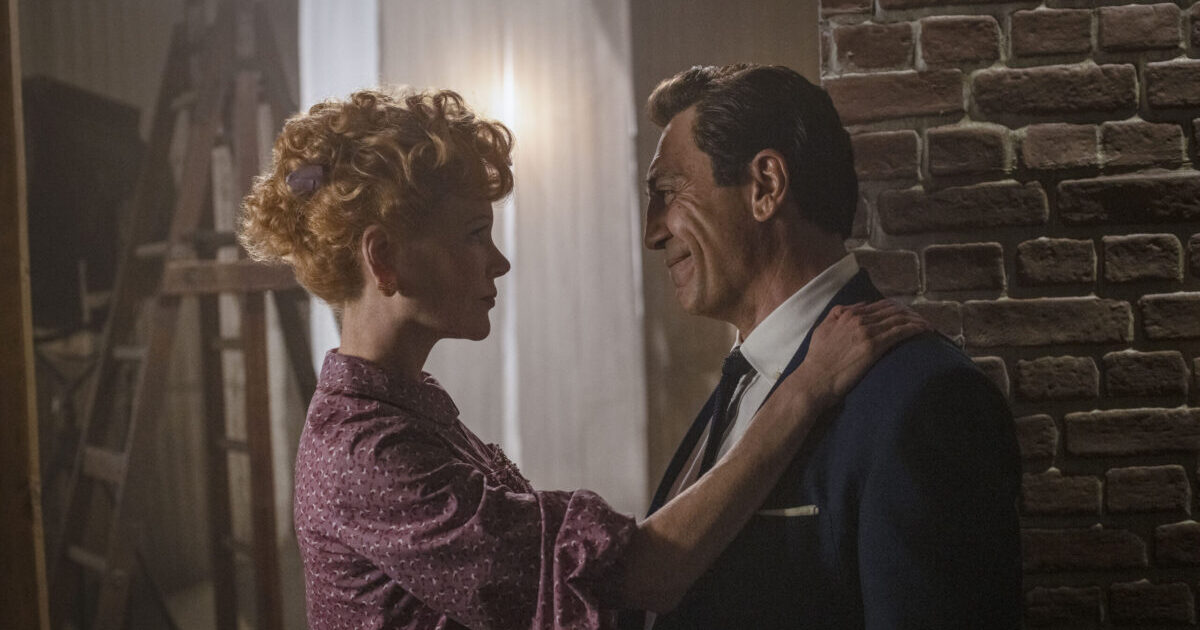 It is amazing just how much Lucille Ball’s comedic influence continues to be found in comedy sixty years after her almost universally beloved series I Love Lucy originally aired. My parents and grandparents laughed and laughed as they watched reruns of Ball and company performing the iconic skits that have more than passed the time. As a child, I did not give her or the series the respect I should have. This may be due to it being in black and white or just that the humor was not geared toward 8-year-old boys. Whatever the reason, it was not until my teens that her work clicked with me.

Now decades later I still see her comedic influence, almost carbon copied at times, on sitcoms right up until today on the Disney and Nick series my children watch. It could be easy to dismiss it as nostalgic, but there is more to it than that. Aaron Sorkin‘s new film Being the Ricardo‘s pulls back the curtain on the comedic genius who was Lucille Ball giving us a look .

She was a meticulous comic and a powerhouse negotiator, something that is well explored in the film. But, Sorkin’s latest film is not a puff piece meant to bow at the altar of Ball. It provides a behind the scenes look at the relationships, the business, and the politics of TVs favorite couple Lucille Ball (Nicole Kidman) and Desi Arnaz (Javier Bardem).  After his first directorial effort for The Trial of the Chicago 7, which nabbed numerous Academy Award nominations including Best Picture, Sorkin brings his trademark rapid fire dialogue and bouncy narrative beats (for better or for worse) to the golden era of sitcoms all within one week in 1953.

The film puts Lucille Ball under the microscope exploring the process of her creativity, the ruthlessness of her backroom power player persona. We get to  both her personal and work life, this is no run-of-the-mill biopic. It is structured almost like a mystery or a true crime series where the seeds are planted early on and then Sorkin slowly reveals the details, holding back key information to string us along on each word in hopes of finding out how things ended up.

Gaps are filled in a faux-documentary style using talking heads interviews from older versions of figures in the Ricardos lives seen in the film. For example, Linda Lavin (of 70s TV Alice fame) plays the older version of ‘Lucy’ writer, Madelyn Pugh, played by Alia Shawkat. It is a lofty approach that works to let us both see what happened in Lucy’s life and then hear the commentary on the moments from the same character decades removed. It works well at times, but like many of the creative choices it adds a level of complexity to a story that probably would have been fascinating even if simplified.

If there is one word to describe Sorkin’s style as both a writer and director it is kinetic.  The film continuously bounces all over. We go back and forth in time, from subject to subject  – is Desi cheating, is Lucy a communist, how do we handle this scene, can we have a pregnant woman on television; hallmark Sorkin. Conversations carry on from the set to backstage hallways to the writers’ room. Those looking for a classic biopic may be a bit disappointed, but that is never the intention here.

As a fan of Ball, classic television, old Hollywood and so on, I found each nugget of info shared here fascinating. Even though some of the stylistic choices I appreciated how much was squeezed into the runtime. Missing are any childhood moments or old and gray moments. The scope is narrow, but the content is dense. Sorkin is a master of weaving a thread. There are a few peeks at Ball’s early days in entertainment that reveal what a power player she was. A scatterbrain on screen, a fierce business woman in the boardroom.

We are also treated to reenactments of a couple of classic I Love Lucy scenes. Sure they do not live up to the original version, but you can see why they hold up. Everything that Sorkin throws up on the screen has a purpose. These let us into Ball’s head to understand just how thought out each joke and scene was. Plus we are given a look at the logistics of old time radio and television at the same time while never losing focus on the people.

Cinematographer Jeff Cronenweth lighting captures the look and tone of vintage Hollywood while never crossing the line into excessive – often feeling like colorized black and white with hues that pop while feeling a bit muted at the same time –  Daniel Pemberton’s classic orchestral score transports us into their world – his work supports the characters/dialogue rather than overpowering it. The hair and costumes are all spot on as is the production design that brings us right into the golden TV era television studio.

My fear going in was would I be distracted since neither Kidman nor Bardem looked much like or sounded like the legends they were playing. Sure, the makeup and hair work to transform her though she ultimately looks like Kidman costuming as Lucy. Yet, in the end that did not mater in the least because her acting chops shine through. Kidman’s work as Lucy is inspired. Less an impersonation, more an embodiment of the spirit of the actress.  Lucy’s trademark whiny trumpet like voice is not quite a carbon copy on and yet it is never an issue.

Kidman dials back the Lucy-ness somewhat, allowing me to not focus on ‘is she nailing it?’ and shift focus to the humanity of the character.She nails the right tone in a layered performance that touches upon the truths about Lucy – her strengths, insecurities, flaws and the genius of a woman who probably does not earn the respect she rightfully deserves. Sorkin treatment of the character fair – he does not put her on a pedestal, instead he lets her lets us see many of the facets of the woman and judge for ourselves. I was caught up in her performance from start to finish.

Javiar Bardem also delivers in a similar fashion. Unlike Kidman’s work, my brain never slipped and let me believe I was watching Arnaz. Still, Bardem is characteristically strong, investing me in the character – even if I never saw him as Arnaz. It was a bold move by Sorkin and it pays off. Strong, human performances trump a good impersonations any day.

The supporting work here is strong, but since most people have no reference for the real-life people they are portraying they do not have to do the heavy lifting. Tony Hale and Alia Shawkat are great as Ball’s Lucy team. J.K. Simmons and Nina Arianda as Fred Wrawly and Vivian Vance (playing Fred and Ethel Mertz respectively) are surprisingly fleshed out. We learn about living under the thumb of Lucy, their personal tensions and much more. They add more layers to an already dense film, landing an emotional impact that makes you enjoy the excursions.

Being the Ricardos will certainly have its mix of supporters and detractors. Those expecting your standard biopic covering the expanse of Ball’s life may be disappointed by the limited timeline covered. Fans of anything old time Hollywood will eat up all the behind the scenes access – a time machine to a different era that I found fascinating. Sorkin fans will enjoy his almost manic pacing. It is quite entertaining and if you’re willing to let him grab the wheel it is quite the ride. The man can spin a thread and his machine gun dialogue is always an experience – its tense, dramatic, and funny. Lucille Ball purists may be put off by this being more of the Sorkin Show than I Love Lucy. They may want to wait for Amy Poehler’s upcoming Luci and Desi documentary. With that said, the film captures the essence of who she is supposed to be and that was what I came for.

‘Being the Ricardos’ does not cast a wide net, but Sorkin squeezes a lot of depth into the story of one week of their life. Kidman, Bardem, and Simmons are all at the top of their game playing TV legends.